General root concept in mathematics, also called nth root of any number a would be another number b which when multiplied n times by itself will yield a. The equation for this is as under:
n√a = b
bn = a
This root calculator also works on this principle and can help you find out the root of any given number.


Estimating Root Of A Given Number


A couple of common roots are square root and cubed root. In case of square root the value of n is 2 whereas in case of cubed root the value of n is 3. It can be quite intensive to calculate nth roots. It may need estimation and trial & error. Square roots can be calculated in more efficient and precise ways but the method given below doesn't need any major know-how of complicated mathematical concepts. For calculating √a:

1. Estimate some number b
2. Now divide a by that number b. If c, the number returned, is precise to your desired decimal place, then stop.
3. Take average of b and c. Use the answer as your new guess
4. Now, repeat from step two


The same method as described above can be used for the calculation of nth root. However, there will be some modifications for handling n. While it is quite tedious to manual calculate square roots. Estimating roots with higher value of n, even with the use of calculator to complete intermediary steps, would be far more tedious. But if you're looking for a simpler method, which may also be less efficient, follow the steps given below. To calculate n√a: 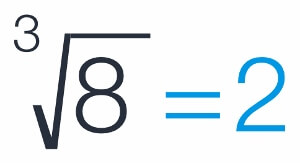 
If you don't want to get into any kind of hassle whatsoever regarding the calculation of root, use our root calculator. The root calculator given here can be used for calculating three different types of root including square root, cubed root and the nth root. For square and cubed root, you just have to enter the numbers whose root has to be calculated and for nth root you will have to enter the number as well as the value of n to calculate the result. After you have provided the required information, click calculate and the root calculator will show you the results straight away.